It’s a been a very busy few hours in financial markets with data and the ECB meeting all grabbing the headlines. That’s not even mentioning the rising and deeply worrying pandemic numbers or the matter of electing the next US president.

US GDP smashed all previous annualised records (16.7% from 1950 for those who like their statistics!) This helps offset the historic 31.4% plunge in the second quarter and erases roughly two-thirds of the total decline since the start of the pandemic. However, it is still the second-worst recession in 62 years and economists reckon the economy is still five quarters from completely recovering. We’ve also had the release of the weekly initial jobless claims which fell to their lowest level since 14 March, dropping by 40,000 to 751,000. Downside momentum remains intact but will renewed lockdown measures lead to another spike in claims in the coming weeks?

The ECB left all policies unchanged at its meeting this afternoon, but President Lagarde stated that “there is little doubt the ECB will act in December.” The contrast between previous head, Mario Draghi and his ‘never pre-commit’ phrase to the current President’s ‘we will recalibrate all our instruments’ is particularly stark in these unprecedented and gloomy times. New economic projections arrive in December so there is much work to be done on how much more QE will come, its duration, volume and attractiveness – does the situation in fact worsen to force the ECB to act sooner?

EUR down, Dollar up

It’s pretty much a two-pronged attack on EUR/USD today! The Dollar is firm on elevated volatility as stocks stabilise while the Vix hit highs above 40 earlier in the session. Meanwhile, the single currency has been beaten down by the ECB’s acknowledgement of increasing economic risks and more dovishness than expected. With October sentiment already slowing ahead of more significant lockdown measures, the dreaded ‘double-dip’ scenario appears to be on the horizon in the final quarter of this year.

Things are looking bearish for EUR/USD now with the pair taking out mid-October lows and heading towards the next support at the 100-day Moving Average around 1.1650. Q3 GDP figures for the region are released tomorrow but may be bittersweet at best with a depressing winter to come. 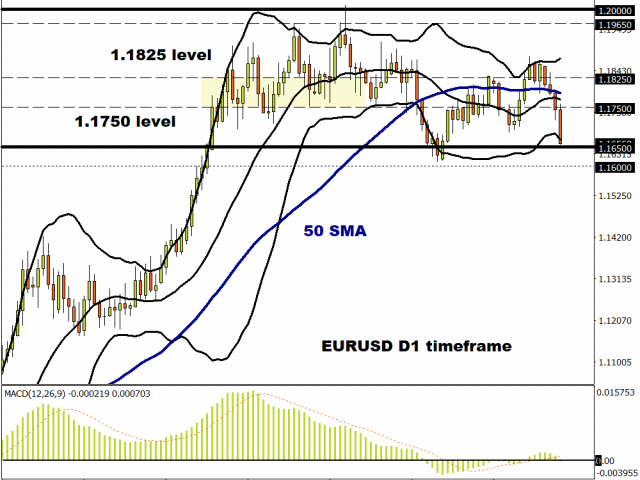 Will the Tech giants save the day?

With ‘Super (FAANGs earnings) Thursday’ nearly upon us, US stocks are trying hard to hold on to support at the 100-day Moving Average. The tech titans, Apple, Amazon, Facebook and Microsoft release their numbers after the US close and may have to do more than beat expectations – as Samsung did earlier today – with all eyes more focused on the outlooks. Any hints of weakness may see the S&P turn red again with September lows at 3209 a major level for bulls to defend.

Disclaimer: This article is reproduced from the Internet. If there is any infringement, please contact us to delete it immediately. In addition: This article only represents the personal opinion of the author and has nothing to do with Mato Finance The originality and the text and content stated in this article have not been confirmed by this site. The authenticity, completeness and timeliness of this article and all or part of the content and text are not guaranteed or promised. Please refer to it for reference only Verify the content yourself.